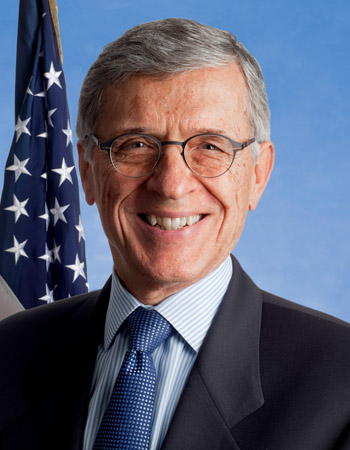 Tom Wheeler became the 31st Chairman of the Federal Communications Commission (FCC) on November 4, 2013. Chairman Wheeler was appointed by President Barack Obama and unanimously confirmed by the United States Senate.

For over three decades, Chairman Wheeler has been involved with new telecommunications networks and services, experiencing the revolution in telecommunications as a policy expert, an advocate, and a businessman. As an entrepreneur, he started or helped start multiple companies offering innovative cable, wireless, and video communications services. He is the only person to be selected to both the Cable Television Hall of Fame and The Wireless Hall of Fame, a fact President Obama joked made him “The Bo Jackson of Telecom.”

Chairman Wheeler wrote Take Command: Leadership Lessons of the Civil War (Doubleday, 2000) and Mr. Lincoln's T-Mails: The Untold Story of How Abraham Lincoln Used the Telegraph to Win the Civil War (HarperCollins, 2006). His commentaries on current events have been published in the Washington Post, USA Today, Los Angeles Times, Newsday, and other leading publications.Presidents Clinton and Bush each appointed Chairman Wheeler a Trustee of the John F. Kennedy Center for the Performing Arts, where he served for 12 years. He is also the former Chairman and President of the Foundation for the National Archives, the non-profit organization dedicated to telling the American Story through its documents, and a former board member of the Public Broadcasting Service (PBS).

Chairman Wheeler is a proud graduate of The Ohio State University and the recipient of its Alumni Medal. He resides in Washington, D.C.